Mid-February we joined the Erasmus Student Network for a bus tour of Galicia, the north westernmost region of Spain, in order to explore La Coruña and Santiago. Finesterre, the very edge of Galicia and the westernmost tip of Europe, was thought to be the end of the (flat) known world until the 15th century. Ships sailing beyond would supposedly fall from Earth. While in Galicia, we enjoyed a rare period of sunlight, a break from a near incessant downpour in the region. This meant that the students of Oviedo experienced a similar break, promptly sprawling out on the stone steps of a church near the hotel. Galicia is also a region celebrated for its shellfish and Albariño wine. In fact, Enrique Iglesias loads a jet with Galician cuisine every month and transports it across the Atlantic Ocean to stock his fridge.

The resting place of Saint James, Santiago is the destination of the infamous European pilgrimage, a snaking path marked by conch shells. Every known path to Santiago in Europe, from as far as Poland, Germany, and Italy, is made conspicuous by the small embedded golden shell. The cathedral of Santiago is the final destination for the pilgrims; those of the Catholic faith from as far as Poland travel by foot, by bike, or by horse in order to visit the Saint’s remains and absolve their sins. In the past, the road was quite dangerous and many perished from thirst and exhaustion while crossing the Spanish plains. Thus, it is a path also marked by graves. It has become relatively safe with improved technology and accommodations, though many prefer to dress in the traditional garb with walking staff in hand. The Cathedral is just as impressive of a vision from a distance as it is front and center. Its face, “La Gloria”, presents sharp and detailed features—lined by the statues of various saints and littered with columns. A pervasive theme in its adornment is the conch shell. The Cathedrals four doors, in the shape of a cross, were each created in a unique architectural period, presenting the evolution of Galician cathedral presentation over centuries. Post-tour we enjoyed some of the regions infamous Albariño wine in an outdoor seating area near its central park, conveniently within earshot of a pair of troubadours performing lounge versions of well-known songs. The sunlight was dazzling against the white pavement, and a massive St. Bernard posted near us with a similarly stupid grin on its face. The wine was a unique white with a surprisingly light taste contrary to its acidic and potent odor. By night, we left the hotel in search of Santiago’s nightlife only to find that there isn’t much during the coldest parts of winter. This led us to a restaurant serving pulpo de la gallega, Galician octopus. Steamed with sparsely added olive oil and paprika, its simplicity attests to the sublime quality of the seafood in the area.

The tour took us from Santiago to the coastal port city La Coruña. It is a city made famous by the Torre de Hercules from the twelve labors of Hercules; constructed in the first century A.D it is the oldest functioning lighthouse in the world. The lighthouse is on a rocky face overlooking a sea painted by the deepest of cerulean blues. Patches of yellow spring flowers dotted the hill. The prime real estate of La Coruña faces the lighthouse and the sea, a long expanse of four story apartments in shades of white and ivory with floor to ceiling windows (though, this might actually detract from its appeal due to the consistency of the rain). The Plaza de Maria Pita is found just inside the city limits, a plaza dedicated to a woman who, during times of war when most men had been killed overseas, led a battalion of women against the English attacking Galicia. To continue with my ravings about Galician seafood, this is where you can find the best pulpo de la gallega, mejillones de la roca al vapor (mussels), and percebes (steamed barnacles). Though I would have never thought to order something as unaesthetic as a barnacle, it was lucky that my adventurous friend Alissa was there to let me sample hers. 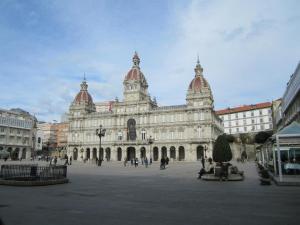