Trying to describe Barcelona is almost impossible at this point. It has so many distinctive neighborhoods that there is no all-encompassing description of this darkly glamorous and urbane monster. Its immensity is hard to imagine despite our many attempts to capture it with a panoramic shot. Barcelona has an obvious liberal and politically active air, a diverse youth culture, pink/blue/green/blonde! hair, all tones of skin color, and the kinds of quirks that I live for. It feels FREE. I even saw the first example of a Desigual design being worn, and it wasn’t as bad as it looked in stores. And, it definitely doesn’t hurt that the city is hugged by shore, mountains, and plains.

Each neighborhood has a stark style, thus making it easy to distinguish once you have crossed from one to the next—though, there really is no way to accurately compare Barcelona with New York. Where Madrid is a city of Spaniards, Barcelona belongs to all of Europe. It doesn’t have the typical Spanish flair, as felt in Madrid. In fact, I don’t think I saw any ham at all. On the downside, this means that there was little to no opportunity to actually use Spanish. Another translation issue was certainly the fact that most immediate citizens of Barcelona consider their first language to be Catalán. Catalán was used more prevalently than Castellano, and so it was much like being in a separate country entirely. It sounds like and appears to be a meshing of Spanish and French. The abandonment of Spanish practice was a negligible sacrifice for a week in Barcelona.

The enormous underground metro system is highly efficient, running every three minutes to every location in the city. Though it generally closes at 12, weekends it runs through the night. The green line, which carries tourists to most of the well-known sites, is plagued by pickpockets. We witnessed this firsthand on our first ride from the airport to the city, though at least I had been doubtful of the high crime rate the people of our safe little haven Oviedo had told me about. Exiting the metro, it is interesting to see the stars in the sky. Despite the bright lights, the sky is so void of clouds that every star glimmers in a way that I have never before seen in a city.

We exited the metro at the Lesseps stop in the Gracia neighborhood, where our apartment was located. This apartment was found through family rentals, which offers privacy and comparative luxury for lower prices than those found in hostels in major cities. We fit 8 people into a spacious apartment with a fully-equipped kitchen, 3 bedrooms, leather couch, and outdoor pool. Even more wonderful was that it was a 10-minute (vertical) walk to Gaudi’s Parc Guell.

Parc Guell is known for housing a hippie community and also some of the Okupa (Occupy) movement, which originated in Barcelona months before those in other locations. Parc Guell is the product of creative genius Antoni Gaudi, whose projects are a definitive aspect of the Barcelona style and infest most tourist shops with postcards. Gaudi plays with neoclassical and gothic elements while adding what seems to be a spacey and hallucinogenic twist. The park’s structures stretch out of caves, melt and drip, spiral, and spout water. We came here often in order to hear guitar music and watch the activity.

I was also able to meet up with mi amiga mejor Julia Freedman, who is directly enrolled in la Universidad de Pompeu Fabra. We hiked up to the art museum, which offered a great view of the city. Behind is Mont Juic (Mountain of the Jews), the location of the 1992 summer Olympics–this event worked to essentially revitalize and reconstruct the city into an international center. It offered plazas with an extremely clean design, white and lined by neatly pruned shrubs. Barcelona is a prime example of the effects of hosting an event like the Olympics, as it completely transformed the fortunes of the city.

When you turn the corner from the Sagrada Familia metro stop, the first feeling may be confusion. And then you spy the massive vision out of the corner of your eye. And then you gasp. Some people even scream. The church is a daunting and dark vision. After writing a 15 page research paper on its architecture last semester, it was really humbling to sit in its shadow. One of my favorite activities was watching mouths drop as visitors enter and look up. And receiving 2.5 million visitors a year, I am positive that each makes about the same shocked face. The detail is some of the most incredible and heartbreaking work I have ever witnessed. You can spend hours outside without actually seeing or believing all of Gaudi’s intricate and yet unfinished masterpiece (luckily, for enthusiasts, that is how long the line generally lasts). Student discount for 11 euro and 3 euro ride to the top. Colorful mosaic windows span the building with alternating color schemes. After 120 years of continuous construction, it has not yet materialized into Gaudi’s ultimate dream.

The tourist walkway Las Ramblas was overwhelming in terms of claustrophobia and harassment by those attempting to peddle paella, live turtles, Catalan cream, and Barcelona FC scarves. I found it to be underwhelming in terms of fun. La Boqueria is a little gem to the side of Las Ramblas, an enormous market containing some incredible fresh fruit smoothies, live crabs and lobsters, and peanut butter/hot sauce/Goya/all the other things you miss by now. By night, it is clogged by drunks, prostitutes, and McDonald’s clientele. The nearby Placa Reial/Plaza Real holds a 20’s style lounge bar, a jazz club, and flamenco site, but there are so many other options for nightlife that the area is avoidable.

Barcenoleta is the neighborhood containing the man-made beach, boardwalk, extensive bike lanes, yachts, paella restaurants, gelato, and live music. The band Gadjo, was a particularly interesting performance, with the combination of brass, a standing bass, and an accordian. And though we were not able to catch their concert in La Sala Monasterio later that night, we walked away with a CD. We spent an entire day in this area, though it was not quite warm enough to shed layers or swim.

Sunday we visited the Picasso Museum, embedded in the antique and truly charming Born neighborhood. It has a very classic European feel, the only neighborhood in which it is legal to hang laundry from the verandas. The museum offers free admission Sundays nights, for which we were incredibly grateful after experiencing a few days of inflated Barcelona prices. It was interesting to see the evolution of Picasso’s work throughout his long lifetime, which spanned almost the entirety of the 20th century. Born in Malaga, Picasso lived in Galicia, Paris, Nima, and Barcelona, which influenced his radical style shifts. I was most interested by his ceramic urn work, which I had never seen before. But surely the highlight is the grand finale, in which he plays with Velazquez’ Las Meninas (see below, and imagine a room filled with others). 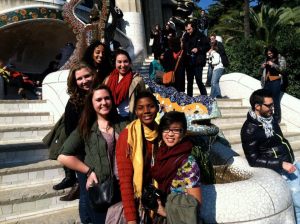 We opted to celebrate two birthdays and perfect weather with Budget Bikes, a three hour personalized bike tour throughout the city. Sometimes, there is nothing like blue skies and bike lanes. Because Barcelona is fairly flat with wide streets and lined with bike lanes, it is the ideal biking city. Without this tour, there are so many crevices we would have overlooked. I was quickly entranced by the alleys of the beautiful Born neighborhood. I even fell off at one point after colliding with a pole because I could not stop looking up and around at all of the beautiful apartments and specialty boutiques. Many utilize the city’s bike rental system, which I have only seen elsewhere in Montreal. Most streets carry a rack of pristine red rental bikes which tend to be inexpensive and can be locked and returned in any of the infinite locations.

Inspired by tour guide Rick Steves, I have created my own (totally useless and completely baseless) top 5 for my time in the city:

5. Dressing up for Carnaval…and realizing that we were the only ones who did so