I am currently typing from the Estacion Sur in Madrid, awaiting the bus that will take me to Sevilla. Also, I am listening to the new Beach House album, Bloom, which is sure to be the soundtrack to my bus ride through the south of Spain with its massive floating choruses over dreamy progressions.
The past week has shoved me back into the state of chaos that comes with uprooting. Over five months, I became hopelessly and uncharacteristically attached to my friends, to Oviedo, and to life with my loving host family. This, I did not realize until the moment of despedida, when I felt like each goodbye was like getting hit with a brick in the gut; I couldn’t choke out the necessary words signifying the coming changes. Each goodbye rolled around in my mouth heavy and dry. I feel like most of the last nights were spent in long warm embraces: with my family, with new friends, with strangers, alike. This semester has been a constant state of motion and evolution, of an intensity that urges me to match it in passion and finesse. I plan on landing in the Pittsburgh completely spent–I’ve lived more lives than one. I want the fuel gauge to read zero just as I am landing in the city of my childhood and nearing the Suburbia that awaits the first part of the summer. In any case, this is my favorite kind of chaos, and I am relishing every moment of it.

Note: I made the mistake of using “Adios” when saying goodbye to my host sister. Adios, literally meaning “To God”, conveys that it is the end. She corrected me, saying, “hasta luego”, a phrase that is tied with the expectation that we will see each other again some day.

Luckily, the quick pace of Berlin made me forget these woes! Berlin, I love. I can’t help but think that there are few places like Berlin in the summertime.

And last night, in anticipation of leaving Berlin, I hopelessly clung to Hannah and Alyssa, who would be the last Oviedo remnants for some time. We hugged goodbye amid the chaos of Dr. Pong, a ping pong based bar, and my boots felt heavy as I ran to catch the last metro leaving towards my hostel. Not realizing that the hugs were happening in a moment of near tearful goodbyes between friends, many people in the bar also approached me for them. So it goes with these kinds of trips.

This morning in Berlin, the S9 running from my hostel to the Schoenfeld airport was the subject of a bit of arson, and because I know nothing and learned nothing of German during my time there, it was a close call arriving for my flight. From there to Madrid. Metro to bus station. Board bus to Sevilla. It has been a mechanical day, but also a miraculous day because I have finally learned to wrangle public transportation solo.

By the way, Sevilla is hot. Very, very hot. The online gauge reads 40 celsius and the streets are strung with huge fabric creations for shade. I am going to be melting all over the pristine cobblestone streets. And so began a continued celebration with that babe Amanda Villela, who I had before traveled to Barcelona with and found camaraderie with over a shared appreciation of chocolate and wine. After a few days of tapas and flamenco and architectural exploration and riverside wandering, Amanda flew home and I took a bus to Granada, where my friend Mark was studying this semester. Granada, home of the Alhambra, has a noticeable touch of architectural influence from Northern Africa, with its focus on geometry, plants, and script in design. Mark and I climbed some of its nearby hills and parks for great views of a dry landscape quite different than the topography of the northern Spain I had come to know. This is the Spain I had imagined. Also, beer here is accompanied by free tapas for those on a budget. I went out with some guys from the hostel to run away from an aggressively strange Euro-metal band that was staying in our room and found easy company over endless ham-based tapas (if I haven’t enunciated this before, Spain is not kosher friendly).

Back in Sevilla, I ran into one of these guys on the street, skin pink and crispy, and Joel became my companion for my time in Sevilla. Another person who easily makes friends, we found a lot of common interest in people-watching and just aimless roaming and I was sad to leave him there.

This is the occasion in which I wish I had thought to bring a camera–I had wanted to experience this trip with fresh eyes, and not so concentrated on exposure and choosing a lens, however, my memory of shape and color has become quite murky.
A memory, that still holds strong, however, is my despair when I learned that my adventure was coming to an end as I pulled into Bajaras. A pit in my stomach and a sigh in my heart, I stepped on the plane, pulling out a pen to begin planning for the next one. 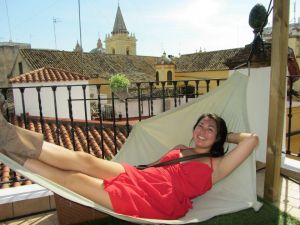