After spending a lot of time feeling crushed by the enormity of the buildings around me and the multi-level planes of Seoul activity, I fled to South Korea’s second largest city in the south by bus with a new friend from Base Camp.  Busan is a seaside city known for its fish markets, port, fast talkers, and greenery.  I am a complete sap when it comes to the sea, and many of my favorite urban areas in past travels have met with water.  While I cannot necessarily compare it to Barcelona, Tel Aviv, or Los Angeles (not a favorite), it has a certain loose and laid-back charm that the sea gifts these cities.

4 ½ hours and one lost T Money card later, we pulled in to the central bus station, which is actually about 45 minutes outside the central city by metro.  Despite being smaller than Seoul, Busan has a highly developed metro system with four lines.  The hostel was located at the Haeundae station exit, near Haeundae Beach, which is considered to be the best public beach in the country.  Despite it being a bit cooler than typical beach weather, I feel like my eyes expanded and exploded trying to take in all the shades of blue.  For dinner we walked along Haeundae Market, in which every shop was marked by a tank of live eels at the door.  After doing a lap, we were beckoned into one restaurant by an overenthusiastic Korean photographer who declared it to be the best with a booming maggeoli-laden laugh.  His photographer friend had lived in Philadelphia for two years and gleefully showed me all of his pictures of celebrating Phillies fans on an iPad.  There we also met a couple staying in the same hostel, one being another half-Korean.  I am always excited to meet another of bi-or multi-racial background, to see what their experience has been at home and abroad.  I’m telling you: we, and racial ambiguity, are the future!  But in Korea, we are not really considered Korean.  Many people here have told me that I look Native American or Spanish, and if I mention that my mom is Korean, the reply is often something like, “OH! But you’re not reeeeaaally Korean….”   Anyway, I sure looked Korean eating seafood pajeon.  The pajeon didn’t disappoint, and at an underwhelming 2,500 won each ($2.50), we feasted. Pajeon is a kind of pancake made with leeks, potatoes, rice, and a variety of innards like octopus or kimchi.  DAMN.

Afterwards, the six of us went to a Korean-style Hof establishment for pitchers on pitchers before heading to a plush noraebang site on the street for a karaoke hour.  Tokyo sites have more English options, but Korea still had enough pop hits for us to pull something together.  And by the end, the Korea photographers Tek and Kim had turned it into a Psy marathon.  A new video was just released, and I am dreading how many times I will hear “Gentlemen” in my remaining months.

The Haeundae area hostel was called the Indy House, run by an avid Korean traveler who fashions himself after Indiana Jones.  Its uber-clean facilities, heated floors, and espresso machine on top of a friendly staff were all gold stars in my eyes.  But because it is used to mostly Korean guests coming from nearby towns with friends to go out for the weekend—despite great common room and roofdeck, nobody really mixed.  My beaten and broken attempts at communicating in Hangul only got us so far as expressing shared interest in coffee and good weather.

We started off the first sunny day walking along the beach, where families fed shrimp crackers to excited flocks of gulls and hikers in full gear charged toward the nearby cliff paths.  The salty air gives new life.  And flowers/parks/trees everywhere.

From there we bussed to the Haedong Yonggung seaside temple stationed on the cliffs of the city to the east.  It is dedicated to the Great Goddess Buddha, the Buddha of mercy.  The sculptures were beautiful, and I gave many a dime to the Buddhas of Academic Achievement; as far as this class goes, I need all the help I can get.  Because of the number of tourists, it felt less a spiritual site than one of traditional architecture and gorgeous landscaping.  Nevertheless, I was set aglow by the place.

Next, we cut across the city westward to the Gamcheon Art Village embedded into a Mediterranean looking cliff of residential streets.  The unique design of the neighborhood fuels the fascination: the narrow winding alleys between houses, the ladders, and vibrant colors.  And if you follow the fish-shaped arrows, you will find a number of locally created and themed art installations.

One metro stop over is Gukje Market, the site of the Busan International Film Festival and more ludicrous Korean-style shopping megaplexes.  Here, you can get anything, and I mean ANYTHING.  The real treasure of this venture was the Jagalchi Fish Market, world renown for its range and quality.  We spent hours strolling through aisles of tent bars, tanks with threatening looking sea creatures, and many “Hi’s and “Hello”s from feasting locals (Sally’s blonde hair and friendly demeanor attract a lot of attention).  Finally, we ended up on the second floor of the indoor fish market complex for sashimi overlooking the harbor.  A sashimi platter meal with fish stew and all the usual sides is 40,000 won for two people.  The two soju drunk pranksters next to us tried speaking to us in broken English and Malaysian before turning to the universally understood means of magic tricks.

On my last day in Busan, we headed northwards towards the mountains to find Beomeosa Temple.  This had a much more sacred air, with most of the visitors arriving with the intent of true kneeling prayer.  The only sound to be heard was chimes in the wind.  Space to move, space to feel.  Almost every Korean visitor was decked out in full hiking gear including boots and stocks in preparation for the two-hour ascent to the top.  Sally and I didn’t get past the peak of the temple itself, which required a small hike through a sea of rocks on the mountainside.  The foliage coupled with blooming sakura gave the temple its earthy colors.  The buildings themselves were in the colors of all traditional Korean buildings, a rose red base with teal and blue heavy trim.  And after exploring its many buildings and stone structures, we were lucky to be leaving just as the thunder rolled in

Sally mentioned that maybe it is because it is less congested and there is less activity that we notice the quirks and take time to appreciate each person.  In Seoul, I feel as though I am drowning in a sea of people, and a lot of the time, fail to notice the outstanding features and little things with each individual.  Busan is sexy.

Sally is just the type of person who is surrounded by a kind of magic, a girl who may actually love making eyes at babies even more than I do, who draws in interesting and friendly people, and in whose company I found the most wonderful of weekends in Busan.  She even seems to shrug off the happy circumstances that she brings about.  Now she has hopped off to Tokyo to prepare for her trek along the Silk Road.  Hope to see you somewhere in the world again! 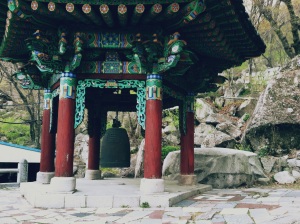 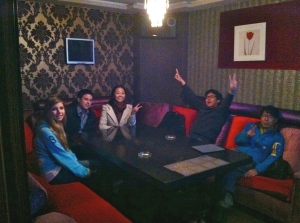