Here I am, writing from a hammock in the sunlight with one hand on a cat.
So far I’ve gone about six days eating only questionable street meats on various states of corn tortillas. So far, so good. After speaking with a Danish vegetarian slow foodie I realized that I don’t necessarily trust meat in the states either, so buen aprovecho.

Oaxaca City is a colorful and walkable colonial town, the capital of the Oaxaca province just south of Mexico City. There is instant appeal to travelers, as you can get a good handle of the center on your first day there. The city center has a strong tourist driven economy, but it is surrounded, including the streets just outside the beautiful colonial area, by the most impoverished region in Mexico. Oaxaca is a well-referenced destination, with the surf beaches of “Y Tu Mama Tambien” just to the south and made infamous by the ventures of Bob Dylan and the Beatles in search of a local religious experience (mushrooms) a few decades ago. I will miss Puerto Escondido, Mazunte, and Zipolite this time around, but am already planning for it in the future. So why do people like it? Because it is of buena onda, buenas olas, and la hierba no cuesta mucho. Easy.

There have been fireworks every night through the night and marching bands will take you by surprise when they turn the corner before you. On each corner is a new display of public art or street art. Daytime temperatures peak at just over 85 F and then proceed to drop 40 degrees by nightfall. Oaxaca is also known for it’s many Spanish language schools. Observe! Wild aging expats in strap on sandals and binoculars with their hands folded pensively behind their backs strolling La Alcala. At breakfast I had been asked if I am following el camino de patchouli, or “the patchouli trail”, as it is affectionaley referred to. It is called this, clearly, for the large amount of free spirits, flower babies, and hippies of all ages that make a pilgrimage through Mexico. I had to laugh at that one, having taken notice of the vegetarian restaurants and yoga studios and surf camps set up by expats. But then again, I make friends easily in that crowd, so I’ll cough and swallow that laugh.

I learned also that travel in Mexico is divided by places inhabited by English speakers (Americans, Australians, Europeans, etc) and those by Spanish speakers. The first two weeks of January are a time of mass exodus from hometowns in Mexico, of the wealthier looking for relaxation, so I have ended up rooming with a lot of Mexicans. Many Spanish speakers seem to have a unified disdain for the largely resort oriented Yucatan, preferring the southern coast. Not only is it divided by place, but by hostel. I learned that people tend to gravitate towards same language based hostels, and so, when I found myself completely surrounded by Spanish speakers for the first time, they explained to me that many Spanish speakers avoid using Hostelworld and instead use word of mouth to avoid rooming with us (us in this case being the lumped sum of all ignorant partying white people who aren’t Canadian).

And then in the Oaxacan Coffee Company, where I’ve since returned every morning, I met Liz, a Swedish American tour guide who is preparing her history inventory to lead tours for Swedes in Mexico. An easy friendship, she walked me through Oaxaca City and we agreed to venture on a day trip out of the city and into the mountains together. It included a visit to the weavers of Teotitlan, where we learned about natural dyes, to Tule, one of the oldest known trees in Mexico, and to Mitla, the religious center of the Aztec empire in Oaxaca. And then, there was Hierve el Agua, a calcified rock formation resembling an enormous cascading waterfall at a higher altitude of a greener Oaxaca. This was by far my favorite experience in Oaxaca, high into the greener region with fresh water pooling just at the edges of the overlook. The next day I followed a Belgian permaculture warrior princess to la Casa de Rudolfo Tamayo, which shows his personal collection of pre-Columbian art. What is special about this exhibit is that it presents the pieces not in a religious sense, but in an aesthetic sense. And she showed me the different wild healing plants found in Oaxaca on the way there. She then hopped onto a bus back to a farm in the countryside where she was working and I realized that I didn’t even know her name. So it goes.

The next day, by chance, some familiar faces checked into the hostel where I was staying. Like I said, I’m taking a path well beaten and friendships do not come more easily than when they are thrown at you. And so, in a happy mangled mess of languages, we made our way to the ruins of the political center of Aztec era Oaxaca, Monte Alban. I’m even learning more about English after being around Australians and Brits, aside from the Spanish, French, and German that was necessary to communicate. It is constructed atop a mountain with a clear view in all directions as a reflection of its power, so we chose to take a public bus to the foot and climb the ancient highway to the peak. This, I do not actually recommend, as it turned out to be a narrow paved road that cars would carve a path through. And the difference is about 30 pesos, or $3. Monte Alban proved to be both an impressive viewpoint and educative experience in a pre-colonial civilization, perhaps one of the first cities in the sense that we understand it, in which church and state meshed precariously. The wind whipped at my hair atop the pyramids and the sun at this altitude was close enough to gift burns all over my face.

I tried a few of the seven kinds of mole and tlayuda, drinking chocolate, coffee, and mezcal from the many local distilleries. Mezcal, like pulque, is derived from the maguey cacti plants, and there is a mezcaleria on every corner, from run down mountain shacks to distilleries for mass production. I tried chapulines (spiced grasshoppers) and followed them with street mangoes. Bottled water always, followed by Negro Modelo always.

Again, you should come here. 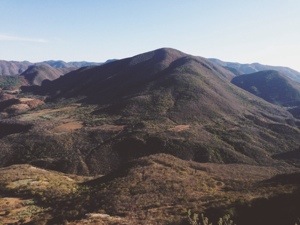 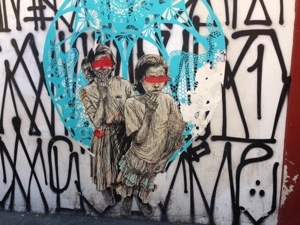 One thought on “Mexico II: Oaxaca”

Leave a Reply to onchickenbuses x