The roosters/explosives/political rally/my-undeniably-prompt-body-clock props me into a sitting position at 6 am. I haven’t set an alarm since 2014. I immediately want breakfast. The fog is lifting from the mountains.

I drink a liter of water and spoon papaya out of its shell. The papaya is perfectly ripe, as it has been every time since arriving. I chew and swallow some of the seeds for good measure because I heard on the natural remedies grapevine that they kill parasites. They taste like they would kill parasites.

It’s a slightly overcast day with potential for sun and I briefly consider blowing off my morning school visit to do laundry. I pull at the back of my neck where the swimsuit I am currently wearing in lieu of clean underwear digs into my skin uncomfortably. I laugh and bundle my trash classification materials together and wonder if I will get a chance tomorrow. I greet the baby who never cries on my way out and pass by the five-year-old who has never been on time to school getting rushed by her nanny to eat some beans. My adopted mom stops me to drink tea and in a loving way doesn’t take no for an answer.

My phone rings. I see the name and prematurely turn back in the direction of my house as a voice utters blandly, “Fijese que seño”, translated to “Brace-yourself-for-this-whopper-of-an-excuse-miss”. My school cancels on me because they are very busy preparing a dance routine for the September 15 Independence Day festivities in two weeks and this will likely take the 4 hour school day as well as the combined brainpower of the school’s three teachers to coordinate. (This usually consists of pre-pubescent girls dancing around in bras made out of trash bags to club music staring solemnly at the floor while the crowd exhales, “what joy!” The feminist killjoy ruling my conscience winces but waits for a better opportunity to talk about it. ) I swallow my disappointment. My agenda is always full of scribblings and edits and crossed out fumblings. Plans change. I call a friend.

I instead change directions for a surprise visit over the hill. I walk past the clap-clap-claps of muchachas preparing tortillas for the first of three shifts. After 8 months of facial recognition, they aren’t afraid of me anymore. I walk past the tuk tuk driver who always drives in circles around me yelling “Hello baby” with his little head tilted at an unimaginable angle out the side and then the much scarier one who drives in circles around me saying nothing. I resist the instinct to flip them off–proactive versus reactive right?—I am much more reactive these days. I walk past the spot where a dog attacked me months ago only to step on its immobile tail when I peek down at my watch. This time it just rolls over lazily. Life is like that sometimes. I ascend the last slope with a view of the small unmarked school building up ahead only to hear a student start to yell, “Teacher! She’s here! Arlene is here!” In a hilarious caricature, the school director begins to yell to the students to pick the plastic trash off of the lawn and like ants they scramble with wild haphazard action. On the inside, the 34 students with 5 white teeth between them are hiding junk food wrappers behind the bookcase and arranging unopened toothbrushes. When I reach the door he takes my hand and says “Buenos días” like “you didn’t see anything” like “we do this every morning”.

Colleen told me a story about her first basketball practice, where her team hired a random man with no mentionable basketball experience to become their trainer. This man invited them all to run from one end of the court to the free throw line, spin in 360 degrees and then shoot. It feels like an excellent metaphor for this improvised experience. Sometimes, we just have to spin and shoot and see what happens.

Afternoons are anything I want them to be. I have watched the Harry Potter movie series backwards. I walk around town and chat with people. I learn how to cook with spices. I hike. Despite my complaints about “too much free time”, I always say that I want to have a career that allows me to go home at the end of the day and pursue my actual interests.

If you haven’t read The Alchemist, you should read The Alchemist. Coehlo writes that “people are afraid to pursue their most important dreams because they feel that they don’t deserve them, or that they’ll be unable to acheive them.” The mantra of “six months left in Guatemala” reminds me that the time left is somehow too much and also too little. 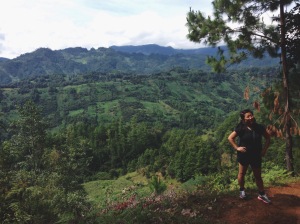