I beat the alarm, but not the roosters. The sky is clearest at dawn, the peaks of the three visible volcanoes untroubled by the thick clouds that collect throughout daylight hours in the dry season. And so I run, without music, or rather, with the music of another Chapina morning. I run, past the solemn prayers issuing out of one house, table saws buzzing in another, weaving through the wild dogs with their bared teeth and cloudy sad eyes. I am saying a time appropriate greeting to the uniformed schoolchildren and their mothers and and to the saleschildren in traditional woven wear holding Coca Cola to the heavens and to suited professionals during an early commute to Guatemala City. Sweat is beading around my neck in what has quickly become a flood, and I then know then that it is time, that I am ready to resume a daily coup d’état against the mosquitoes that haunt the dark wet spaces of my shower. My daily shower begins as a bloodbath; I am never contented until I can crush at least seven. The wildness in my eyes during the hunt is reflected under dim bulbs. And so I step in, the broken shower head looking down on my with a gaping grin that dares me to curse or complain about what has become my greatest motivation to run everyday. With a jolt, the cold stream issues forth and I begin the process of leaping in and out frantically. And I find myself beginning to wonder if hair just grows forever if you don’t shave it. I make a mental note to Google it the next time I have internet access.

Outside, the streets beg modesty, and so I wear skirts that kiss my toes while I kick up dust. I feel the curiosity burning into my back. People will yell at you in a generally good intentioned way, with your height and almond eyes and strange body language. They will yell “where are you from!” because, as the laws of physics work in the bubble of any language barrier, comprehension and noise correlate. If you just say it as loudly as possible, you will be understood. Eventually you will stop responding with “Philadelphia”, because there is a Filadelfia in every country in Central America. And instead you will throw out a “New York, kind of”. And to that someone will ask you if Rihanna is a nice person.

Let me instead be known as the one with a mango in each hand.

I sit down to lunch with my family. They made chow mein to make me feel comfortable. I didn’t understand until I did understand. They think that Korea is in China. I feel warm and loved all the same. But I save another mental note to download maps the next time I have internet.

A neighbor will ask you how many children you have together with your boyfriend, and you will say no boyfriend and no babies with the boyfriend you don’t have. And the neighbor will tell you how barren women are sad women. Repeat this conversation three times throughout the week and then it will be over.

As if it is contagious, you are suddenly late for everything by at least 15 minutes.

A bomba explodes overhead and your Philadelphia heart puts you flat on the ground with your hands over your head. “Oh, that’s the church?” you say. “Celebrating a quinceaños birthday with explosives?” you say. You will do the same thing again tomorrow.

We sit six across on a school bus you used to ride to kindergarten. Strapped to the roof is a caged dog and a dresser. Inside, the local drunkard who mutters darkly to himself, the child who says hello and hides and again hello and hides, a squinting woman with albino features, 2 live chickens, and more people than you ever believed that steel beast could swallow, and it zoom zoom zooms around winding mountain paths. The old man who squeezed in next to me on the bus bench has maybe just shit himself. I am trapped against the window on a full bus, and so I imagine that I too will smell like shit when I leave. I turn to the window and watch during what has become a meditative activity. I squint at men from afar wondering if I could ever truly love a man with his own initials shaved into his haircut. Green mountain landscapes and profound spaces open up before the camioneta at every turn, and I want to yell out “Are you seeing this? Can you believe this is real?” And it is so overwhelming that I want to turn and shake the people next to me to see if they see it too, but I resist this time because I’d rather he not shit himself again.

Guatemala has its ways of testing my mettle.
I took my first hot shower in three weeks. It was so good that I cried.
And I watched the domino effect: Andi with happy tears spilling over a hamburger, Marianne with a cold beer pressed to her face. We are here, and we are so alive. 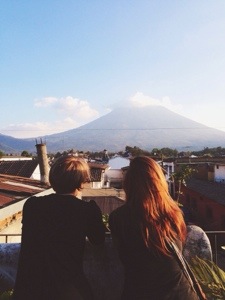 One thought on “Guatemala II: A Day in the Pueblo”