So far, one lesson has been that You have to be willing to cop that guap to get around Tokyo.  Your legs can only take you so far across blocks this size. The metro system is the priciest I have experienced, and being one of the largest metropolitan areas of the world, you will be doing a fair amount of transfers.  Luckily, we love our legs and enjoy seeing urban layouts. And so I add another metro card to a growing collection, and the best design yet.

Honestly, while walking around I was not apt to noticing direction.  And while underground in the metro system, it is difficult to envision the grander spatial qualities that pass above ground.  Because of this, a lot of the places I saw feel disconnected.  Hannah and Paulina did a great job of showing us their favorite things accounting for our limited timeframe and heavy jetlag.

The Meiji Shrine embedded inside the central and enormous Yoyogi Park is a preserved natural area accompanied by a garden and crawling with crows. In line with Western tradition, I found it unsettling to be surrounded by crow calls, the messengers of doom. But in Japan, crows are an embedded symbol of power, the directors of fate, appearing in the floorboards of both Taoism and Shinto beliefs. While they flock like pigeons in the parks, they have a different relationship with the people.  The Shrine itself is in the Shinto tradition and built in 1920 in order to honor the spirits of the Emperor Meiji and his Empress.  It’s been awhile since I took Monty Hull’s “Nature in the Asian Tradition” course, so when I saw the water fountain, I went to take some sips.   It turns out it is for washing your hands, a kind of holy water.  The tranquil setting was interrupted intermittently by crow calls and the double clap preceding prayer at the head of the shrine.  There was a space to write prayers on wooden tablets, and the wall they were hung was covered in the languages of every piece of the world.  The list of suggested prayer topics was topped by “Academic Success” and “Personal Triumph”.  It is Asia after all. 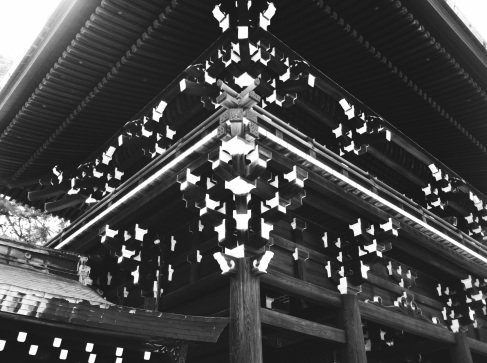 Nearby Harajuku was exactly what I imagined, a twisted cartoony acid trip that has gone through the motions of tourist branding and is mostly filled with visitors.  I was most excited to walk these streets, having been raised revering No Doubt’s Gwen Stefani. Young people here dress much less conservatively than other places I have been to in the past, which I found surprising due to my experiences with Asian standards of conservatism, dignity, and respect.  Then again, that is like comparing New Yorkers to all of America’s spectrum including Westboro Baptist Church or Sarah Palin or old Jewish grandma retirees on Florida’s keys. I am recognizing more and more an inability to define a “culture” in a world that continues to melt flow and mix. The world is globalizing, and for this, the real diversity seen across the globe is moreso dependent on financial resources and also the urban/regional dichotomy. In Harajuku, the style is ultra tight and I would have loved to stay there all day ogling all of the new patterns and HAiR …maybe this is the future or maybe it’s today’s niche for people seeking escape from normalcy.  From there, it is an easy jump to Shinjuku.  There was an exhibit on the top floor of the Shinjuku Louis Vuitton store, a polished place that still welcomed a group of young people that looked liked and had been living out of backpacks for the week.

In Shibuya was the most intimidating and overwhelming intersection I have ever witnessed, with multiple forms of transportation interlacing at different levels.  Masses of determined pedestrians take the street in between highway and streetlight traffic and Tokyo’s bikers, all hardcore and all insane.  Meanwhile, the overhead highway system and Shibuya station tracks formed what felt like a cage. 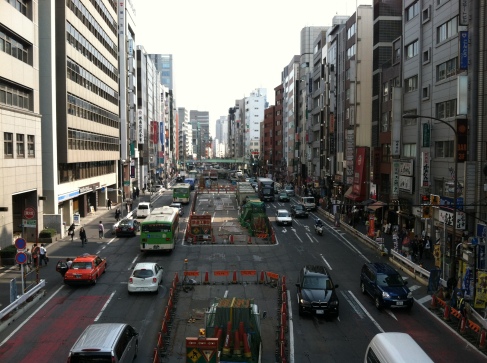 On Saturday we took the train to the nearby town of Kamakura—beachside and full of Japanese surf aficionados, ex-pats, and fishermen.  It was crawling with tourists looking for the local big a$$ 7th century welded Buddha and a number of Shinto shrines mixed in with private residences.  A better designed, more aesthetically pleasing Jersey shore sans seedy nightlife.  Green tea is one of my new favorite ice cream flavors.   I tried Omikuji, a kind of lottery for telling fortunes in the Shinto tradition.  The interpreter took a look at it, smiled at me, and said “good”, which only reaffirmed my feeling of awesome luck.  The specifics I will never know.  On the beach, watch for thieving hawks and sexy Japanese surf gods.  Apart from getting completely turnt around on the metro line on the way back, Kamakura was a day well spent. 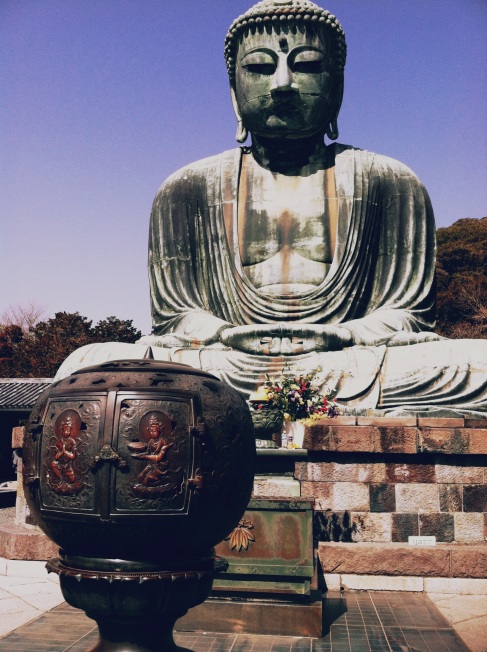 The next day we rose to meet the view of the city from Tokyo Towers.  It is a central nucleus that shows the machinated sprawl expanding outward into the nothingness of the horizon.  Tokyo is forever from here.  The wind caused a huge imposing cloud of some gritty dust to hang over the atmosphere adding to the post-apocalyptic feel of so much metal against the sky.

That night we occupied a private room in the Big Echo karaoke lounge in Shinjuku.  They offer a special slashed price for a time frame of 12-5am, when the metro reopens.   This meant some spending the evening with Shaggy, Kool & the Gang, and Prince.   Almost everyone fell asleep on the train on the way home at some point.

Another highlight of the weekend was vending machine ramen orders.  It is like the Russian roulette of dinner menus because the only distinguishable thing on the buttons is the price.  It’s a fun game to see what shows up after you pay.  Caroline went for the add-ons before receiving a steamy bowl of what most would say is the deluxe edition including a beef bone, dried meats, and hard boiled egg.  Japan-1, Vegans-0.

Missing y’all so much already. See you in Seoul!