On Saturday evening, we went to the Magpie Brewery and pop-up BBQ.  It is the token craft brewery in Seoul.  This sort of micro brewing is actually illegal in Seoul, so Cass and Hite have monopolized the malt beverage industry.  When entering Magpie’s basement extension, I felt as though I had crossed into Northern Liberties.  The same ex-pat community frequents the same chain of events, so there were some faces from the Grimes concert and certain Hongdae clubs.

Platoon Kunsthalle in Gangnam is a huge event space with allocations for artist residency, constructed of storage units and glass panels.  It hosted the Future Shorts Film Festival this Saturday, which sold out right before we got there.  The Future Shorts Festival is a pop-up film festival taking place in many international cities in support of independent film.  I was excited to meet another Philadelphian there and make plans for finding the Seoul extension of La Colombe after enduring instant coffee for far too long.  Gangnam itself is enormous, with six lane intersections criss-crossing through it, with a modern layout that sprung to reality out of the area’s farmlands in the 1980’s.  I saw more German cars than people here, the epitome of Korea’s dreams of sophistication and modernity.

In a country with highly conservative values and a tradition of what may be called self-deception, “Homo Hill” in Itaewon is a place where gays can be comfortable to meet others.  One Korean man even had the audacity to say that there is only one gay in Korea, referring to the only out entertainer in the media.  We chose to start Friday night here.  Pretty Korean boys in heels and furs serve the drinks in Always Homme-personally, my favorite bar on this block.  Its proprietor, a 50 year old Korean man, told us after dragging us in that he goes by Paul by day and Paulina by night.  After living near Philly’s Gayborhood, I was shocked and uncomfortable to see the way gay members of society are treated.  It may not be outright violence, but it is something that goes unspoken of and is equally psychologically damaging.

Also, Niclas, Sander, and Eun Jin, who have been there since I first arrived, as well as a slew of new friends departed for other parts of Korea and Japan on Sunday.  Tanya has also flown the coop, proclaiming to be done with this place.  I miss my comrades and moms (Eun Jin).  It has been a quiet Monday.

I am coming to terms with the fact that this is probably not the city that I want to end up in as a permanent fixture–but for the now I can and am enjoying it as a global city.  I have met so many incredible people at the hostel, but in the city itself I feel singled out or isolated and my values clash aggressively with the more upfront and emphasized Seoulite values dealing with perfection in terms of personal worth as gauged by specified definitions of appearance, success, and the extravagant wealth that fuels it.  Profit > People.  Coming from the U.S., a nation that I had thought set the standard for muddling a bastard of capitalist principles and religion with policy, I am seeing what this attitude has spawned in countries more recent to develop in its image and at a frenzied and rapid pace.

And where can I get my eyebrows waxed?  Asians don’t seem to have this type of problem, considering their needs are usually on the opposite end of the spectrum.  Many women here even have their eyebrows tattooed on.

To touch on something that a lot of people have been contacting me about, NO, South Korea is not in a state of panic over the lunacies of a certain Great Leader to the north.  I woke up Saturday morning to my neighbor’s panicked cries of war.  Very soon after the initial anxiety attack caused by these headlines, I realized that nobody else in this country really gives a damn.  This attention-seeking behavior as culminated into a reiteration of the ongoing state of conflict has not made any visible impact on the day-to-day activity in Seoul.  Most believe it to be with the intent to secure sources of aid as a desperate country struggles with a lack of resources, allies, and military strength.  My thoughts and sympathies are with those suffering under this isolated autocratic state.

Not to make it sound like a side note, but my class at Yonsei University has begun.   With some persuasion, they changed me out of the morning Level 1 class that they had put me in with 12 other Chinese students and into the afternoon professional/business oriented Level 1 course.  The other students hail from as far as Saudi Arabia and Azerbaijain as well as Hong Kong, Singapore, and Japan.  The median age is about thirty and the median weight of gold adorning each body is about 3 lbs (6.6 kg).  Hilarious.  I have already decided on taking up an Alissa Thorton-inspired attendance policy, but I foresee an interesting in class experience. 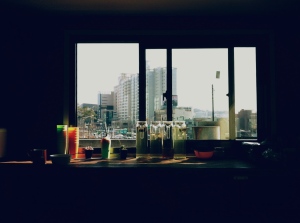 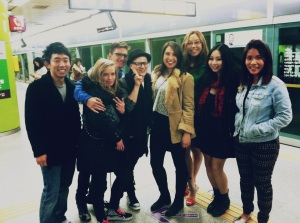